Born in Bear Creek (Marion County), A. A. Lauderdale was reared on a farm, where his love of the land and its people began. Graduating from the Sixth District Agriculture School in Hamilton, Mr. Lauderdale spent three years teaching in rural Alabama. During WWI, he served two years in the Army — one year in France. Upon his return to Alabama, Mr. Lauderdale completed his B.S. degree in 1920.

The Extension life of A. A. Lauderdale began in January of 1924 with his appointment as County Agent of Shelby County, where he served for 36 years. Upon his retirement, the Alabama Legisla­ture issued a House-Senate Joint Resolution highlighting the life and career of this dedicated man.

Quoting the resolution: “Mr. Lauderdale’s broad personal knowledge of farmers and farming, stemming from a rural background, experience, and complete dedication to their interest, was marked by great success in translating extension service research into practical benefits to farmers of Shelby County thus contributing immeasurably to the welfare of the farmers and to the agricul­tural economy of the county. He has left an indelible imprint upon the hearts and minds of Shelby County boys and girls as a result of close personal interest, enthusiastic support, and leadership in the establishment and promotion of 4-H Club activities in the county. In these and countless other ways, Mr. Lauderdale used the office of county agent and his fine leadership in the cause of the betterment of rural homes, schools, churches, and communities. In the process of these endeavors he has won the friendship, respect, and admiration of all the people of Shelby County and has evoked in this legislature a keen sense of appreciation of his splendid accomplishment.”

County co-worker John Jones cited Mr. Lauderdale as being among the first leaders of the 4-H dairy project work in Alabama. “He loved kids. In fact, he believed that kids and animals went together. He traveled all over the South with 4-H’ers showing dairy calves and had fun wherever he went,” said Jones.

For his fine leadership in the cause of the betterment of rural homes, schools, churches, and com­munities, the name of Arthur A. Lauderdale is inscribed on the dedicatory plaque of the Extension Memorial Chapel. 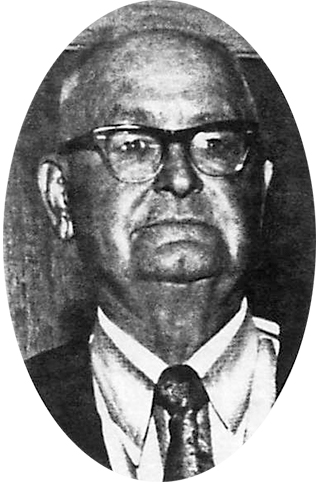