William F. “Bill” Nichols was born near the rural Mississippi town of Becker. As a boy, he moved to Sylacauga with his fam­ily. Here he began his great love for Alabama and its people.

When it came time for college, Bill chose Auburn University, where he could pursue his keen interest in agriculture. The years he spent at Auburn was filled with honors and extracurricular activities. Originally a walk-on, Bill’s hard work and ability earned him a football scholarship. He lettered three years and captained the 1940 team. Earning a B.S. degree in agriculture in ’39 and an M.S. in agronomy in ’40, he was a member of three hon­orary fraternities.

For a brief time, Bill was an Extension assistant county agent in Autauga County. His career with Extension was curtailed when he joined the U.S. Army as 2nd Lieutenant in 1942. As a young officer, Nichols saw action in France and Germany, where he was critically wounded. Thanked by his nation with a bronze star and purple heart, Bill Nichols retired from the military in 1947 and returned to Sylacauga with his wife to begin a long and successful career in business and politics.

Rising to the position of Vice President and President of the two companies for which he worked, Mr. Nichols exhibited his leadership abilities in private business for 12 years before being elected to the Alabama House of Representatives in 1959. Four years later, he moved to the state Senate, where he earned recognition for his efforts to improve education, roads, and farm economy. In 1966, Bill Nichols was elected to the U.S. House of Representatives, where he remained until his death in 1988.

As an influential member of Congress, Bill Nichols’ support of farm legislation carried a lot of weight. Remembering his roots and initial training in agriculture, Bill always voted to give farm­ers a just reward for their dedication and hard work.

It is fitting that the name William F. Nichols be inscribed on the dedicatory plaque of the Exten­sion Memorial Chapel for the many years of service through various governmental offices. 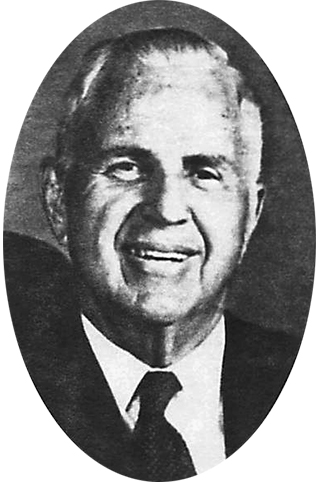