Dr. Ann Elizabeth Thompson was born in Daviston AL in 1932, a few minutes after her twin brother, Joe. She earned a B.S. with honors in Home Economics at Auburn University, a Masters of Adult Education at the University of Maryland, and a Doctorate of Education at Oklahoma State University.

Her career began with her experiences in 4-H when she showed her calf without a lead or halter at the 1947 State Fair in Birmingham and was named State Showmanship Champion. Dr. Thompson joined the Alabama Cooperative Extension Service (ACES) in 1953 as an Assistant Home Demonstration Agent in Enterprise and Dothan, before she moved on to the Florida Extension 4-H Staff in 1957 where she served in various Florida State Extension Home Economics positions. In 1966, Dr. Thompson was appointed State Leader, Home Economics, of the Virginia Cooperative Extension Service and served there as Professor and Director of Family Resources. In 1973, she became the Associate Dean of the Extension Division in Virginia. She received the Distinguished Ruby Award of Epsilon Sigma Phi, the highest award given to a member.

In 1984, after sixteen years in Virginia, Dr. Thompson returned to Auburn University to become the first-ever female director of ACES and only the second female Extension director in the nation. In 1988, she was named Vice-President for Extension, and in 1933, the Associate Provost before she retired from the University in 1994.

Dr. Thompson was inducted into the Alabama 4-H Wall of Fame in 2008. When asked what 4-H meant to her life and career, she replied, “Everything. I could not have journeyed to where I am today without the concept of life-long learning and without all the co-workers and friends who have brought me such joy.”

Dr. Thompson is survived by her sister Mary (Dennis) Catrett and sister-in-law, Ruth Thompson, along with many nieces and nephews. She is predeceased by her brother Joe B. Thompson and her parents Joe and Elizabeth Thompson.

The Alpha Pi Chapter of Epsilon Sigma Phi honors and remembers Dr. Ann E. Thompson by placing her name on the dedicatory plaque of the Memorial Chapel. 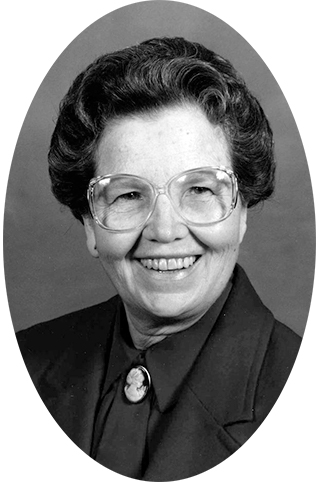