Dr. G. Talmadge Balch was born in Lauderdale County to a dad who was a farmer and a hard-working mother who rarely missed selling produce at the market in Florence. As a kid, he knew he wanted to work for Extension when he saw an agent pull up and talk to his father about using better cottonseed. He knew he needed to be in the truck rather than plowing behind a mule.

Upon graduating from Lexington High School in 1951, he went on to earn a Bachelor of Science Degree in agriculture from AU (1954), a Master of Science Degree in agriculture from AU (1962), and Juris Doctor from Thomas Goode Jones School of Law (1963). He was employed in 1954 as a vocational agriculture teacher at Gordo High School. In 1957, he began his career with the Alabama Cooperative Extension System (ACES) as an assistant county agent in Pickens County. He later became a pesticide education specialist with ACES, a position he held until his retirement in 1995. As a specialist, Balch conducted many precedent-setting research projects that significantly influence modern agricultural practices. He was also a sought-after lecturer and advisor on pesticide application and developments. During his career, Balch published or co-published numerous pamphlets and manuals on safe pesticide application, many of which are still in use today.

Extension was a perfect fit for him. He loved serving people all over the state and training them on the safe use of pesticides. His favorite quote from Shakespeare was: “To thine own self be true.” He remained the country boy whether he was talking agriculture with French, African, Middle Eastern, or Chinese visitors to Auburn. In 1993, Balch was given the Excellence in Extension Service Award.

Balch was a member of Auburn United Methodist Church for 53 years. He served on several boards and committees at Auburn University where, upon his retirement, he was named Professor Emeritus. He was a member of the Auburn Lions Club and Twin City #76 Masonic Lodge, along with several other civic and professional organizations. Numerous groups, such as the Progressive Farmer and Vector Society, honored Talmadge.

He loved his family, most of all. He met the love of his life and partner until death, Mary Katherine Guthrie, behind Samford Hall at Auburn University and married her in December 1953. They had three children – Sue Ann Balch, Benjamin G. Balch (Libba), and Mary Beth Balch McDowell (Lance). He talked almost non-stop of each of his ten grandchildren, and his four great-grandchildren, but he also never lost his interest in and love for his extended family and many, many friends.

The Alpha Pi Chapter of Epsilon Sigma Phi honors and remembers Dr. G. Talmadge Balch by placing his name on the dedicatory plaque of the Memorial Chapel. 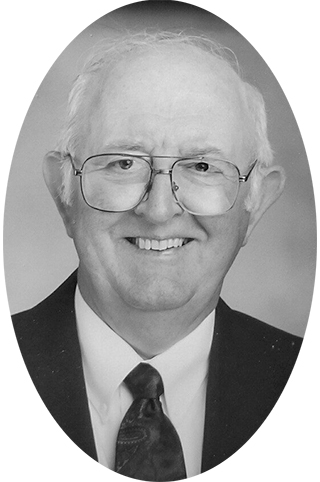