The ACES is a better organization since she “Graced” us with her presence. That’s a quote from Director Mike Sprott in his December 22, 1982, Official Letter to all ACES employees and retirees. All of us felt that way about Mrs. Grace Brown, the retiring budget specialist. We were all better to have known her and to have worked with her as part of the Administrative Services Office in Duncan Hall. She was a friend to all of us, and we were lucky enough to call ourselves her coworkers.

Grace had worked with the budget and the Extension accounts under Directors P. O. Davis, E. T. York, Fred Robertson, Ralph Jones, Jack Taylor, as well as Sprott. She worked for, but also was an advisor, counselor, and friend to, Earle Williams, Robert Horn, and Tom Elliott, the Administrative Services department heads during her 24-year tenure with ACES.

Dr. Tom Elliott, her supervisor from 1979 to 1982, says that Grace was valuable, trusted, and capable Extension worker. Her work at the county and state staff level was behind-the-scenes financial and administrative details, which helped Extension stay afloat on a day-to-day basis. “Her warm smile, sweet spirit, and service mentality endeared her to so many,” he said.

Quoting her retirement letter to her cohorts in Administrative Services, “I shall remember the crises we shared, the deadlines we met and conquered, the problems and questions ironed out together, the pride in accomplishment. And yet we always found time to laugh a little, cry a little, dream our dreams, share each other’s personal happiness and sorrows, and always eat when good food was available!”

Grace was the daughter of Cornelia Branch Frasier and Arbury Hugh Frasier. She was born on March 29, 1919, in Millbrook, Alabama, and lived there prior to attending The Alabama College of Montevallo in 1938. She married Henry Herschel Brown, Sr., on June 18, 1941, and helped with the family business, Brown’s Dry Goods in Tuskegee. Her first Extension position was secretary to Macon County Extension Chairman Jack Bolling from 1959 to 1966, when she and Henry and the children moved to Auburn. Grace became the accountant for all of Extension in 1966, under the lead of Earle Williams.

Mrs. Brown remained a busy lady after her December 1982 retirement. She was active with her church and with her children and grandchildren. She was a deacon with the First Baptist Church of Auburn and volunteered with an international ministry. She was also a member of the Daughters of American Revolution and the Auburn Women’s Club.

Mrs. Brown passed away on August 13, 2005, at the age of 86. Henry, her companion, friend, and husband had predeceased her in 1987. She is survived by their three children, Mary Cornelia Vann of Auburn, Nancy Frasier Veale of Auburn, and Henry H. Brown, Jr., of Birmingham, and seven grandchildren.

We are honored that Grace Frasier Brown came our way. To celebrate her spirit and grace, we inscribe her name on the dedicatory plaque of the Extension Memorial Chapel. 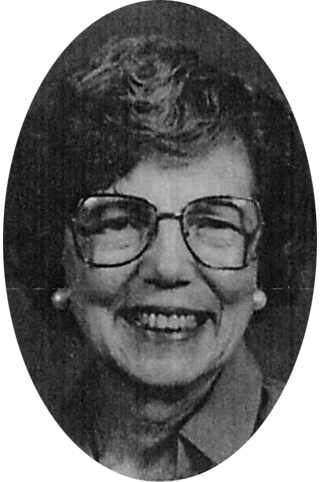