No one doubted that Hanchey Logue’s* legacy of service would outlive him. As the Alabama Cooperative Extension Service state 4-H leader from 1948 to 1970, he influenced the lives of approximately 500,000 boys and girls who took part in 4-H learning-by-doing programs. Under his leadership, more than $1 million was raised toward building the Alabama 4-H Center.

In addition to guiding 4-H members, Logue taught math and coached football at Luverne High School and taught agriculture and shop for 10 years in Pine Apple. He worked as an assistant county agent in Hale County and a county agent in Conecuh County.

His Extension career began in 1942. His dedication to youth led him to conduct the original study for the Alabama 4-H Club Foundation, Inc. He then wrote its constitution., by-laws, and articles of incorporation.

He served on the headquarters committee for the National 4-H Congress, and, during his tenure, he saw 80 Alabama 4-H’ers receive national scholarships. ln 1969, he received the Gold Key citation from the Federal Extension Service. The award, for his total service to 4-H, noted that “throughout his years of service to youth, he has been guided by a belief that 4-H club work develops boys and girls into useful and desirable citizens.” He retired from Extension in 1970.

He had a gift of inspiring and encouraging young people, and he could entertain them with storytelling, guitar playing, and singing. That is how Hanchey Logue, who spent most of his life working with Alabama youth, wished to be remembered. 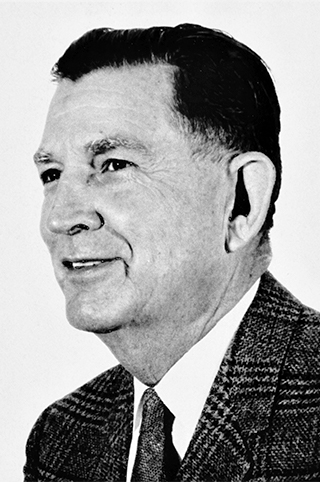