Harry Houston began working for Extension Aug. 1, 1954, in Lauderdale County. He became the 4-H agent in Morgan County three years later. In that time, he formed many 4-H clubs. These were formed in the school system and were separated by gender. The boys’ clubs focused on farming and agriculture, while the girls’ clubs focused on homemaking and food preservation.

With Harry’s leadership, two young men in Morgan County went to the National 4-H Club Congress in Chicago. He has memories of the chick-chain sponsored by Sears & Roebuck- 100 chicks were given to 12 4-H members each year. These 4-H’ers had to raise them and bring six back to the final show and sale of the year.

In the spring of 1960, Harry switched to a more agriculture-based Extension position where he saw the beginning of using chemicals for weed control as part of a plan he helped pilot for no-till farming. For that work, he received recognition from the Morgan County Farmers Federation in 2009.

Harry always kept his interest in 4-H and knew what was happening in the county program. As the county Extension coordinator, he went to 4-H Summer Camp, taught day camp workshops, and always was on hand to listen to a demonstration or hear a speech. He gave advice to young Extension agents who needed that extra push to start a program.

With his retirement, he became a valued resource volunteer, on hand to judge at county 4-H round-up and district 4-H congress. He troubleshoots programs on the county and regional levels.

On Harry’s visits to the Morgan County Extension office he brings sweets and fruits from his garden, and he also brings the wisdom that unfolds through his many wonderful stories. 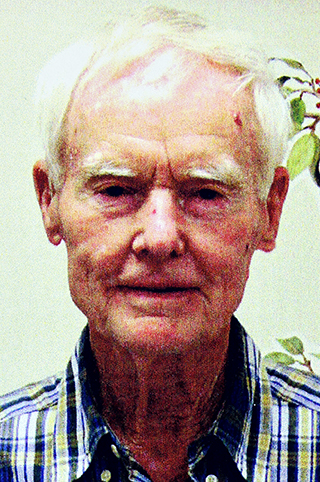