A Choctaw County native, James Russel Speed was born in Halsell, Alabama, on March 27, 1907. He graduated from Auburn High School in 1926 and entered Auburn University. While working full-time, he attended school part-time and grad­uated in time to begin employment with the Alabama Coopera­tive Extension Service in February 1943 as assistant county agent in Dale County. In 1945, he was appointed county agent in Coffee County and served there for the next thirty-two years, retiring from the Extension Service on March 31, 1977.

In addition to his role as a 4-H boys club leader, Mr. Speed was very effective in developing the county’s livestock, poultry, and row crops programs. He always emphasized the critical need for farmers to follow research recommended by the Extension Service.

Thousands of people in Coffee County have benefited from his work and influence. A tireless worker, he loved the farm people with whom he worked and was one of those rare individuals who consistently put the wishes and needs of the people he served ahead of his own personal needs. He was a man who cheerfully went the extra mile in service to others.

W.D. Thomason, who was county agent in Dale county during Mr. Speed’s years there, said that “Speed,” as he was affectionately known, was the hardest working agent he ever worked with. He never looked at the clock and worked six days a week from early till late. Another friend and co­worker, Tom Casaday, said that the first time he met with Mr. Speed in his Enterprise office, he noticed a sign on his desk which read, “The important thing is not where a person is at the moment, but the direction in which he is going.”

Mr. Speed was always moving in the right direction — caring for his wife and family, caring for his friends in the Methodist Sunday School class, and always caring and concerned about the wel­fare of the farm people in Coffee County.

James Russel Speed died on August 21, 1992, at the age of 85. His survivors include his daughter, Nancy Speed Wallace, his son Bobby R. Speed, and nine grandchildren. His wife Perrine had pre­ceded him in death.

Mr. Speed is remembered for his courteous manner, his gentleness, and his dedication to serving the community. In recognition of his many contributions, the name of James R. Speed is inscribed on the dedicatory plaque of the Extension Memorial Chapel. 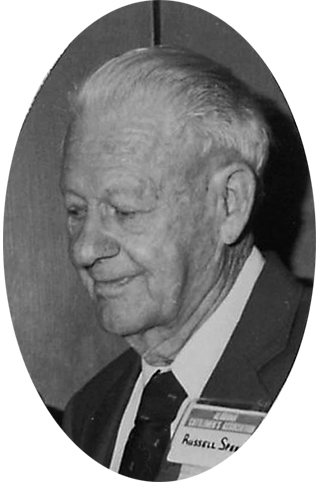