You can’t speak of Jamey Clary without remarking on what a genuinely kind person he was. In a conversation with him, you felt like you were his first priority. That’s how the farmers in Hale County described him when speaking of his friendship, expertise, and character. Jamey always had the farmer’s best interest at heart.

Jamey was born on January 17, 1952, to his parents David and Rowena Clary of Akron. He was raised there in Akron on the family farm with his brother Jeffery and sister Charlene. Jamey graduated from Akron High School in 1970 and became a student at Auburn University. He graduated from Auburn in 1974 with a Bachelor of Science degree in Agricultural Education.

He started working for the Alabama Cooperative Extension Service in 1974. After brief stays in Houston County, Etowah County, and Tuscaloosa County, Jamey was able to move to Hale County, which was home. There, he became the lead agent for extension programming for livestock and row crops and was promoted to County Extension Agent.

In 1982, Jamey graduated with his Master of Agricultural Education from Auburn University. He was home in Hale County and his Extension career and programming really began to take off. In the next ten years, Jamey was a co-author on two Extension publications, provided Soybean for Profit programs, provided leadership to aquaculture programs, bull evaluation clinics, drought relief programs, and coordinated activities in Hale County for AGRO. He became a member of the Rotary Club, the Cattlemen’s Association, Farmer’s Federation, the Auburn Alumni Association, and many others.

Jamey was promoted to County Agent Coordinator for Hale County in 1991. He was a leader and held many offices of leadership throughout his life. During his membership in the Alabama Agricultural County Agents Association, he was President of the organization in 1999, he was the DSA award winner in 1997 and received the 4-H Certificate of Achievement in 1981. Nationally, he served as Chairman of the Sea Grant Aquaculture Committee.

Jamey was a part of many communities. He was a part of the row crop world, the aqua-cultural world, and the beef cattle and animal science world. In certain situations, he was able to form and change parts of industries in the local area around Hale County, in Alabama, and more recently was setting the pace for the entire marketing of catfish.

However, the most important community was home and family. He and his wife Gina had two sons, Chase and Kyle. Jamey held many offices in the Stewart Methodist Church; he was a great neighbor and an extension agent everywhere he went, helping people. It was a shock to everyone when an accident claimed his life on December 4, 2007.

His contribution to the lives of Alabamians is honored by inscribing the name Jamey M. Clary on the dedicatory plaque of the Extension Memorial Chapel. 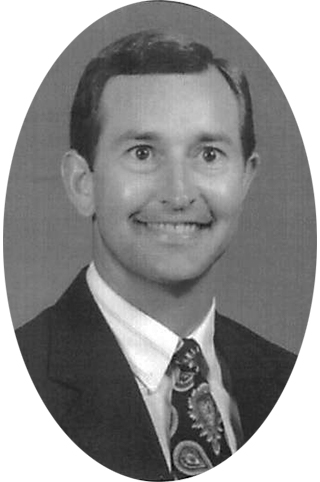