Mrs. Johnnie M. Lane served in home economics in Chilton County from June 1952 until her retirement in January 1983. She supervised one county agent and eight assistant agents during that time.

Lane was born in Greensboro, AL and graduated from Greensboro High School in 1945. She received a B.S. in Home Economics and Sociology from Judson College in Marion AL in 1950. She married Robert D. (Bobby) Lane in 1953. She taught home economics before being employed by ACES.

Chilton County had thirty-two Extension Homemakers Clubs providing education to families in the area. Mrs. Lane was a supervisor of the Expanded Foods and Nutrition Program (EFNEP), led the Trim and Slim classes, worked with home gardeners and with the local fruit stands and food preservation. She served on the Centennial Committees (1974) for the City of Clanton and for Chilton County.

Lane was an active member of the Alabama and National Association of Home Economics. She served as Alabama district director twice and one term as state treasurer. She received the Distinguished Service Award in 1972. She was secretary of the local NARFE chapter. She was a member of the Alpha Pi Chapter of Epsilon Sigma Phi.

She is a former member of the Clanton Pilot Club; received the Chilton Business and Professional Women’s Club Woman of the Year Award in 1972. Selected as Outstanding Agent for work with senior citizens by the Alabama Commission on Aging, and served as a member of Women on Missions with the First Baptist Church of Clanton.

After retirement, she volunteered at the County Welcome Center and Museum for fifteen years. She worked with Clanton Lion’s Club in the Peach Festival Queen program. She enjoyed travel with the church and on personal trips with her husband, Bobby.

Her caring attitude touched the lives of many women and their families in Chilton County. Her consideration, cooperation, and willingness to work with fellow co-workers, as well as, her faithfulness and compassion will always be remembered.

The Alpha Pi Chapter of Epsilon Sigma Phi honors and remembers Mrs. Johnnie M. Lane by placing her name on the dedicatory plaque of the Memorial Chapel. 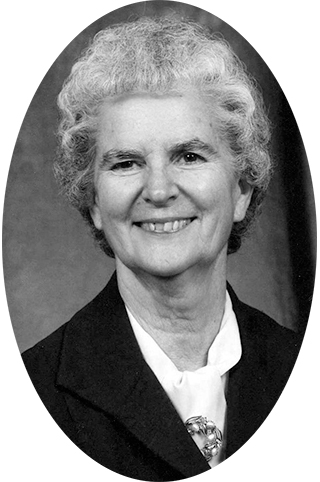