Ray and Elizabeth (Libby) ]ones
Children: Lisa and Mark Yokley,
May and Mike Patterson,
Raymond and Kristy Jones
Grandchildren: Elizabeth and Allison Yokley;
Caroline, Will and Bryant Patterson;
Raymond III and Katherine ]ones
Madison County 4-H Alumni, Volunteers, and Family

The Jones family has been a leader in the business and agriculture community of Madison County for generations. G.W. Jones Engineering firm has been innovative in the business community, and G.W. Jones & Sons Farm has a reputation as a leader in the agriculture world. The farm was the first in the area to transition from cotton farming to pasture grass.

Multiple generations of the Jones family have been involved with and supportive in numerous ways of the Alabama Cooperative Extension System and the 4-H program.

Generations of this family have shown steers and heifers from the G.W. Jones Farm. They have received numerous honors at the county, district, and state shows.

In the mid-2000s, several members of the Jones family, led by Mark Yokley, stepped up and took leadership for the Tennessee Valley Junior Livestock Expo. This became the district 4-H show for the North Alabama counties. Mark led this effort for several years; three years ago Raymond Jones Jr. took the leadership of this show. It is a successful show thanks to their leadership and involvement, along with other dedicated 4-H volunteer leaders throughout north Alabama.

The Jones family has gone the extra effort to ensure success in planning and implementing the Tennessee Valley Junior Livestock Expo. They led planning meetings, oversaw decorations, managed awards, and attended to the many details to make the shows successful.

The family has also helped the Madison County 4-H program by loaning items from the farm -such as drapes, background materials, and other items that lend to the success of youth programs. Extension Field Days and Cattlemen’s Association meetings have been hosted by the farm on numerous occasions.

The family and the business have been recognized at many levels. The farm was named the Farm of Distinction by the Farm City Committee of Alabama in 1996. Other awards include the Huntsville Distinguished Service Award from the Huntsville Madison County Chamber of Commerce and induction in the Alabama Business Hall of Fame by the University of Alabama. In 2002, Lipscomb University named its School of Engineering the Raymond B. Jones School of Engineering.

Many families work to make a difference through 4-H. The Jones family is a shining example of dedication and commitment to Alabama 4-H through the generations and they are to be honored for their contributions. 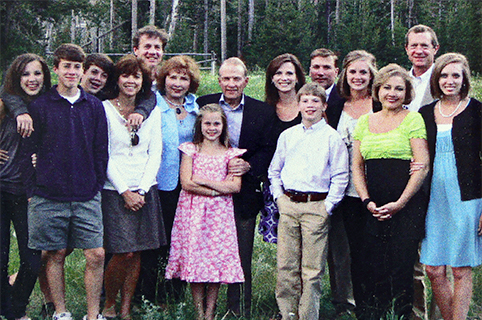