Joe Givhan was a visionary pioneer. He saw opportunities for agriculture and rural development that others did not see, but preached and pushed until they saw and acted to take advantage of what seemed so obvious to him. For example: In 1966, Givhan conceived the idea that Alabama needed a state organi­zation to promote the sale and export of native products. Ten years later, and after much hard work, the Legislature created the Alabama Foreign Trade Rela­tions Commission. When he retired from the Cooperative Extension Service on October 19, 1977, having already given 43 years of service to Alabama, counting his year with the Soil Conservation Service (1934-35), he became director of this new Commission.

During his senior year at Auburn, he helped found the Block and Bridle Club, a livestock organi­zation that has remained active for almost a half-century. While county agent in Bibb County in 1938, he conceived and implemented the first Extension Rural Development project in Alabama. Working through the Corps of Engineers, he was instrumental in securing $50,000 to clean out logs and other debris from along a 15-mile stretch of the Cahaba River to prevent flooding of farmland.

He was a founder of the Red Angus Cattle Breeders Association of America, serving two terms as president. In 1962, Joe instituted his own International Good Neighbor program by donating a Red Angus bull from his own herd to foreign nations, helping them upgrade their beef cattle industry and creating goodwill. Fifteen countries, including Russia and South Africa, were recipients. Working with the State Legislature and the Alabama State Docks, $15 million was secured in 1969 to construct grain elevators at seven river ports which were subsequently responsible for a vast expansion of the Alabama soybean industry.

Joe Givhan was a Dallas County native. He graduated from Auburn in 1930 and the University of Chicago the following year. While there, he served as the Assistant Ringmaster for the Interna­tional Livestock Exposition, then the greatest show of its kind in the world. His Extension career included being a county agent in Hale, Bibb, Wilcox, and Greene counties prior to his four years duty with the U.S. Army (1942-46); 17 years as county agent in Mobile county; 13 years as Rural Resource Development Specialist (Mobile); and one year as Foreign Trade Specialist (Mobile). He died on March 10, 1993.

To honor the many accomplishments of this tireless individual, the name of Joseph P. Givhan, Sr., is inscribed on the dedicatory plaque of the Extension Memorial Chapel. 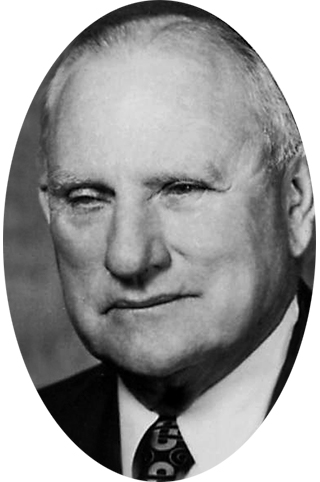