Mr. Lelias G. (Les) Pair was a native of Albertville, AL. He received a B.S. degree from Auburn University of Agriculture Education in 1948 and a Masters Degree in Agriculture Science in 1965. He proudly served in the Field Artillery 1st Infantry Division and was a part of the Invasion of Normandy on June 6, 1944.

He began his career as a 4-H assistant county agent in Walker County in 1948, working with 700 to 800 youth in twelve different schools, Pair developed an outstanding beef calf program with district and state winners. Pair chaperoned 4-Hers to National 4-H Club Congress in 1952.

After operating a farm supply store in Montevallo for four years, Pair returned to the Extension Service as 4-H assistant county agent in Calhoun County in 1957. He worked with 17 clubs involving 900 to 1000 youth. Programs were developed in beef, dairy, poultry, electricity, tractor maintenance, and home gardening. Pair had district and state winners each year, with a total of 13 state winners while he led 4-H programs. He worked with the 4-H program in Calhoun County until 1968.

Pair worked with the adult agriculture program from 1968 until his retirement in 1983. During that time period, he served as county agent coordinator in St. Clair and Calhoun counties. His involvement in Kiwanis, the Farmers Federation, and other organizations encouraged those groups to support 4-H through funding.

Pair served on committees at Anniston First United Methodist Church, American Red Cross, and United Way of Alabama. He volunteered at the Regional Medical Center and was a charter member of Camp Lee’s Board of Directors. Pair was awarded the Legion of Honor for his 70 years of service with the Kiwanis Club of Anniston, as well as the George C. Hixson Award for his significant contribution to Kiwanis.

A successful businessman once said that Mr. Pair taught him how to properly shake hands. The businessman also talked about planting pine trees as a 4-Hers, which helped pay his way through college. Mr. Pair served as a role model for many youths. He was inducted into the Alabama 4-H Wall of Fame in 2010.

The Alpha Pi Chapter of Epsilon Sigma Phi honors and remembers Mr. Lelias G. (Les) Pair by placing his name on the dedicatory plaque of the Memorial Chapel. 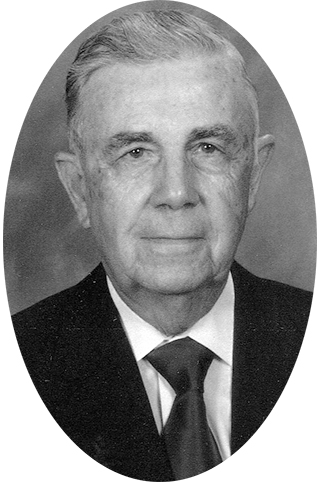