Born on August 1, 1914, Leonard Huffman grew up in Tuske­gee, Alabama. He earned his B.S. degree from Tuskegee Insti­tute in 1940. Upon graduation, he began his public service career as a vocational agriculture teacher in Meridian, Missis­sippi.

His next employment was as a storekeeper for the Federal government at the Army Airfield at Tuskegee from 1941 to 1943. At that time, Mr. Huffman joined the war effort as a member of the U.S. Army. His activities as sergeant were rewarded with many medals including the APTO medal, Philippine Liberation Ribbon, Good Conduct Medal, and WWII Victory medal.

Upon his discharge in 1946, Leonard Huffman worked for the V.A. Hospital in Tuskegee and, dur­ing that employment, returned to Tuskegee Institute as a part-time student. In 1951, he was awarded a Master’s of Education degree. In September 1962, he went to work for the Alabama Extension Service as an assistant county agent in Macon County and remained there for seventeen years.

His retirement from service as county agent was on December 31, 1979. Known as a devoted worker, he always enjoyed helping people. And those he helped are many. With his death in 1986, Mr. Huffman was survived by his wife, Nannie H. Huffman, and son, Leonard Donnie Huffman of Tuskegee.

In tribute to his life of service, the name Leonard Huffman is inscribed on the dedicatory plaque of the Extension Memorial Chapel. 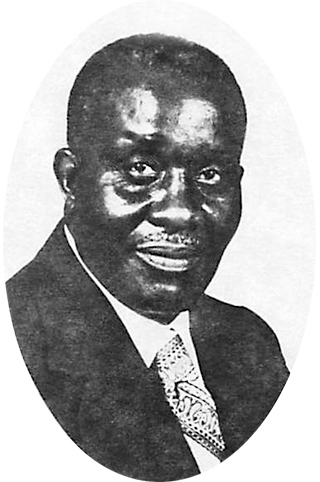