Born on a farm in McKenzie, Alabama, in 1914, Mabry H. Huggins maintained a lifelong love of farming and all aspects of agriculture. He graduated in 1938 with a degree in Agricultural Science from Auburn University. Having been in ROTC during his college years, he was commissioned as a 2nd Lieutenant in the U.S. Army Reserves upon graduation.

Mr. Huggins began his career as a County Agent for 4-H Club work in Perry County and went on to work in Lowndes and Butler Counties until he was called for active duty with the Army Reserves in 1942. Upon his return from the war in 1946, he was reemployed as a county agent in Conecuh County, where he remained until his retirement as County Agent-Coordinator in 1977.

During his thirty-six-year career with Extension, Mr. Huggins was well known for his work with farmers. His greatest job satisfaction came when the Conecuh County farmers did well and when rural programs in that county succeeded. In fact, his daughter Sarah said that he was a friend of every farmer in Conecuh County and carried a key to every locked gate on the farms. His family now has the key collection to serve as a reminder of the impact that Mr. Huggins had on the lives of farmers in the county.

Mr. Huggins also maintained his love of the 4-H program throughout his career. He was the driving force behind the organization of the Conecuh County 4-H — FFA Steer Show and Sale and considered it to be his greatest accomplishment in the area of youth programs. To him, it was not a beef cattle improvement program, but a youth training program. He was also co-founder of the annual wildlife camp for boys in Conecuh County.

Mr. Huggins had many interests and accomplishments outside his profession. He achieved the rank of Major during his tour of duty in Japan during World War II and continued to serve in the Army Reserves until 1953. He was also a dedicated member of the Evergreen Rotary Club and had been honored as a Paul Harris Fellow, Rotary Club’s highest honor. Shortly before his death, the Evergreen Rotary Club had honored Mr. Huggins for over 55 years of service to the community and to the Rotary Club.

In spite of the hectic schedule of a county agent, Mr. Huggins always had time for his family. Having been a member of the equestrian jumping club in college, he instilled his love of horses and livestock in his children, Sarah and Mabry, Jr., who participated in 4-H livestock programs in Conecuh County.

After his retirement, Mr. Huggins had more time to devote to his hobbies which included hunting, fishing, vegetable gardening, and lawn care. His lawn was his pride and joy. His wife Jessie would jokingly say that if someone gave him a telephone pole, he would root one end and graft the other.

Mr. Huggins passed away on April 12, 2002, and is survived by his wife Jessie and daughter Sarah Huggins Boone. For all his years of hard work and dedication, it is a fitting tribute to include the name of Mabry H. Huggins on the dedicatory plaque of the Extension Memorial Chapel. 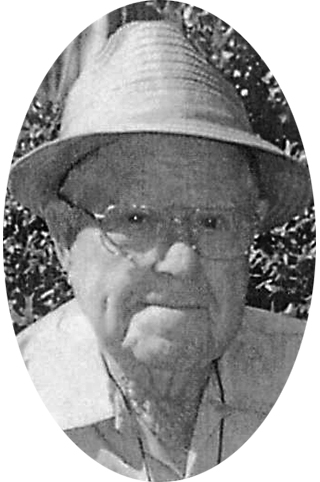