She was born and reared in Lineville, Alabama. Attending pub­lic schools in that area, Mary Dell McCain always was at the top of her class. She loved to learn, and while at Alabama Col­lege for Women (now the University of Montevallo), she continued making A’s. Earn­ing a degree in home economics, Mary Dell graduated with honors in 1929.

For eight years, from 1929 to 1937, Mary Dell taught home economics to students in Wadley, Notasulga, and Five Points. Those youngsters were fortunate to have this energetic teacher. With her strong background in home economics and her love for young people, Mary Dell decided in 1937 to join the Extension Service.

During her career, she was Home Economist in Kentucky and Georgia as well as in Alabama. Eventually, Mary Dell McCain got back to her first love — working with and for young people as Alabama’s State Girls 4-H leader. In this capacity, she instructed and inspired hundreds of young women. Because of her compassion and earnest concern, her leadership was recognized by all. Mary Dell was dedicated to her job. As one coworker said, “Mary Dell gave it her heart and soul. She was a great person.”

She concluded her Extension career as a Home Demonstration Agent in Dawson, Georgia. How­ever, when she became ill and no longer had her full strength, she returned to Alabama, where she lived with her sister until her death.

Mary Dell McCain was loved and admired by hundreds of farm families. The devotion she exhib­ited was appreciated by all she served. In tribute to her years of service, the name Mary Dell McCain is inscribed on the dedicatory plaque of the Extension Memorial Chapel. 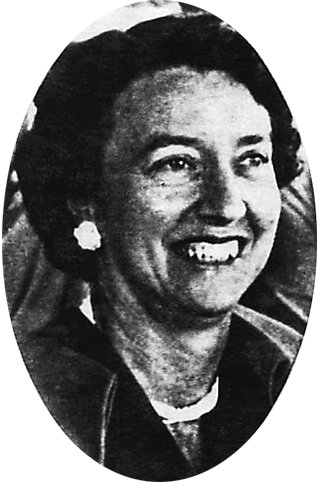