Mildred Morris Stephenson remembers her 4-H projects fondly-cooking, canning, and sewing. Her favorite memory? The friendships she made with other young people from around Alabama.

The Hartselle resident, who celebrated her 100th birthday in December 2012, says 4-H was a significant part of her life growing up in the north Alabama community of Danville, near Hartselle. She was a 4-H’er in the mid to late 1920s.

“My earliest memories of 4-H are meeting with other girls, playing games, and lessons of some sort,” Stephenson said. “4-H was a joy in my life.”

It was because of 4-H that Stephenson traveled outside her home county for the first time. “We went to Auburn, and 1 was one of two chosen to attend a camp or meeting,” she said. “We went by train, and I was 14 years old. It was in 1926.

“We had so much fun attending classes, playing games, and having devotions. We had programs on developing women to become better homemakers. When we left Auburn, we were much wiser.”

And while the technology of today wasn’t available in Stephenson’s youth, she remarkably kept a pen-pal friendship with an Australian girl for more than 38 years. “She was from Bucklebook, Australia, and we wrote to each other at Christmas and on holidays.”

The skills Stephenson learned in 4-H were put to good use when she married in 1931. “Those were the depression times, and she canned and sewed for her family,” said Ginger Nolen, one of two children by Stephenson and her late husband, Bill. Her son died in 1998. “She made all her clothes and all our clothes, and she taught me and other family members to sew as well.”

As a mother, Stephenson encouraged both of her children to be involved in 4-H, and she often volunteered to help with programs. She was also involved with the Hopewell Homemaker’s Club in the Hartselle area, serving the organization for more than 60 years. She also served as church librarian at West Hartselle Baptist Church for 35 years, and the church honored her by naming the library in her name.

Several of her grandchildren have been involved in Alabama 4-H, winning awards for sewing and other projects. Her love of 4-H has been felt by her children, grandchildren and countless others she mentored through her life. 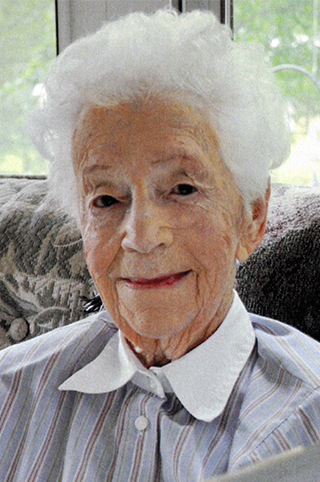