Myrtle Love Good was born in Benton, Alabama, in Lowndes County on January 3, 1907. She graduated from Hayneville High School in 1925. Afterward, she attended Auburn University during summer sessions 1925-29.

Her love and devotion to those she has served are not likely to be forgotten by her coworkers and friends over the state. She was the “mother” of the Extension Family, suffering when the pain came to an individual worker or the Service, sharing with joy and pride in every success and occasion for happiness. She served the university, the state, and especially the Cooperative Extension Service with the highest fidelity, skill, and efficiency. Mrs. Good was recognized by Epsilon Sigma Phi, receiving the Extension Meritorious Service Award in 1976.

Active in many civic, university, and social organizations, Myrtle Good was a distinguished member of the Auburn University Federal Credit Union, having signed on as its eleventh member. She was a productive mem­ber of the Credit Union during her employment at Auburn University and remained a faithful volunteer and member after her retirement.

In discussions with her colleagues and as she retired December 31, 1976, Mrs. Good remarked, “I’ve had a good life in Extension and I’ve gained much satisfaction by being able to support the staff of the Extension workers as they have gone about helping thousands of people improve their lives.” Mrs. Good devoted a total of 47 years to Auburn University.

After retirement. Mrs. Good continued to live in Auburn, where she said, “Retirement will allow more time for my favorite hobbies — growing flowers and fishing.”

Myrtle Good was preceded in death by her late husband, Dr. Henry George Good, Professor of Zoology and Entomology at Auburn University. She died on March 20, 1996. She is survived by two sisters, Florence Love Staggers and Katherine Love Williamson, and nieces and nephews.

In tribute to this lady and her work, the name Myrtle Love Good is inscribed on the dedicatory plaque of the Extension Memorial Chapel. 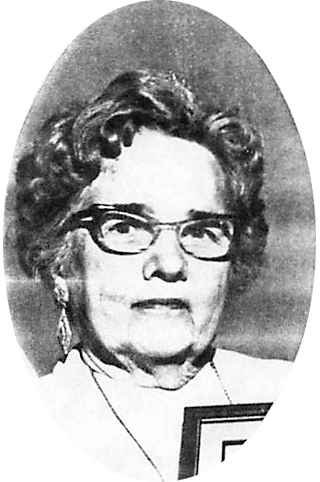