Ralph Thompson began working in Butler County as a 4-H agent in 1954. While he was in Butler County, he recruited 80 percent of the schools to participate in the 4-H program. There were 4-H members from rural areas and the city.

“He touched lives and opened doors for the young people,” stated Rex Blackburn, a 4-H alumnus.

There were many educational opportunities for 4-H members that gave them a better quality of life. He encouraged them to keep good records and some won trips to National 4-H Congress in Chicago for their hard work.

Thompson coordinated several livestock programs. There was a pig chain, dairy, beef cattle, and chick programs. The chickens were donated from Alabama Power, and 4-H’ers in different communities received them. At the fair time, these 4-H members could enter six pullets in the County Fair to be judged. The first prize at the fair provided money that often would pay for chicken feed for a month.

J. Paul Till, another 4-H alumnus, says, “Mr. Thompson was always pushing, encouraging and recruiting me for various 4-H projects and programs. Because of him, I entered and won awards in such things as the safety program, livestock judging, and public speaking.

“Perhaps, more importantly, he gave me more encouragement than I ever received at home and filled a void of support that was lacking for me, a shy, reserved farm boy from a small agricultural community in South Alabama.”

Thompson was successful in securing sponsors for the 4-H program and worked with sponsors to recognize 4-H members for their accomplishments. There were watches donated and presented at the Annual County-Wide 4-H Rally to the outstanding 4-H members. Scholarships for 4-H Camp were available. Thompson also made sure that if 4-H members won a trip to state or to national that they had the things they needed for the event or contest.

In 1976, Thompson came to Baldwin County as the County Extension coordinator. He continued to recruit sponsors for the 4-H program that provided more opportunities for young people in Baldwin County. Thompson retired in 1984 and continues to be supportive of 4-H. 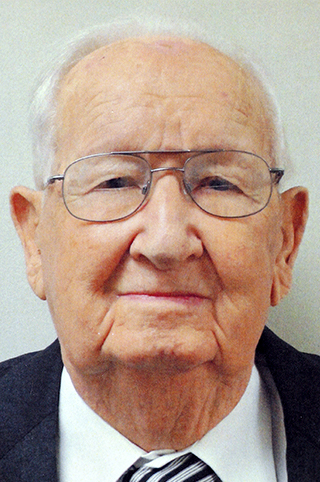