“Mr. Kirk was a gift of God. On May 29, 1993, that gift was returned to God. … Mr. Kirk defined the word trust. He gave life and meaning to loyalty, commitment, integrity, dedication, and generosity. His genuine interest and care, coupled with his knowledge of nature, instilled confidence in producers to make decisions and to stick with them. He taught us to be thrifty with the resources provided by a good crop and to accept the disci­pline provided by a poor crop. He will be missed, but the value of God’s gift will remain forevermore.” Powerful words spoken by Jimmy Sanford, an Autauga county cotton farmer, and echoed by many.

R.H. Kirkpatrick, an Extension agent for 34 years, from July 1944 to July 1978, practiced county extension work in the traditional sense, placing the emphasis on the word “service” in the Cooper­ative Extension Service, understanding that the most effective and beneficial programs were those developed to serve needs identified within the county. He had the unique ability to free himself of the bureaucratic bindings of meetings and reports to devote his full energy to serving “his people.”

It was during his 25 years as county agent in Autauga county that his innovative programs gained recognition in agricultural circles throughout Alabama and surrounding states. His knowledge of cotton production was legendary. Kirkpatrick worked very closely with Autauga county cotton growers. In the fall of 1966, he provided leadership in the organization of the Autauga Quality Cotton Association. After his retirement, he became Executive Vice-President of the association.

Because of his hard work and effective leadership, Kirkpatrick was the recipient of many presti­gious awards, among which were: 1967 “Man of the Year” for the Alabama Crop Improvement Association; 1982 Progressive Farmer‘s “Man of the Year”; Alabama Agricultural Hall of Honor; election into the honorary agricultural fraternity Gamma Sigma Delta; and Distinguished Service Award from the Alabama County Agents’ Association. Also, so appreciative were his cli­entele in Autauga county that they presented him with a new automobile upon his retirement.

Ray Harold Kirkpatrick was born May 13, 1921, in Canton, Ohio, to Mr. and Mrs. W. E. Kirk­patrick. He graduated from Montevallo High School in 1938 and attended Howard College in Bir­mingham before transferring to Auburn, where he earned a degree in agricultural education in 1942. After graduating from Auburn, he taught vocational agriculture at Albertville High School in 1943 and 1944.

In honor of his many contributions to the people of Alabama and the people of Autauga County, the name of Ray Harold Kirkpatrick is inscribed on the dedicatory plaque of the Extension Memorial Chapel. 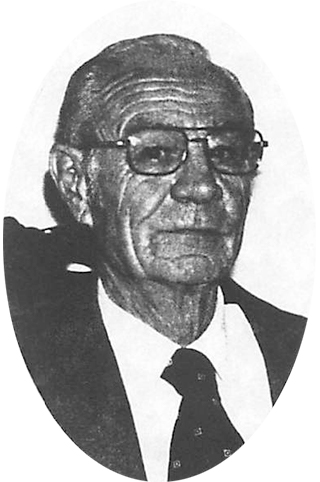