Four generations and more than 70 years of 4-H club involvement mark the Maples family of Limestone County. When Mack and Doris Maples began farming, they relied heavily on the Limestone County Extension office for help and advice. Involvement with 4-H for their son, Billy, was the natural next step for their family. Four daughters (Anne, Emily, Susan, and Jane) followed Billy and became 4-H members. Mack and Doris spent their life enjoying the 4-H activities of their children, grandchildren, and great-grandchildren.

Billy’s first 4-H club work was in 1946 while attending 4-H meetings at Friendship School in Limestone County. His first project was three beef calves. He entered his calves in the county and district shows and came away with a County Champion ribbon and a District Reserve Champion ribbon. The next year, Billy had two calves and one highly fertilized acre of corn-yielding 66 bushes, more than three times the county average. His calves won Champion Middle Weight, Champion Angus, and Grand Champion of the state show. Using the money he made from the sale, he bought four registered Angus heifers and one registered Angus cow, the foundation for his herd today and the source of funding for his college education. ln 1949, speaking to the Birmingham Kiwanis Club, Billy said 4-H taught him how to meet people and how to stand on his feet and talk to people.

Billy and Nancy encouraged their children, Dave, Diane, and Tommy, to participate in 4-H. They had 4-H beef projects with heifers and steers in shows until they graduated from high school and earned national 4-H trips to Chicago for the National 4-H Congress, to Fontana and Washington, D.C. Billy also involved neighborhood youth, teaching life long skills because he mentored them. This generation continues to support 4-H activities on several levels.

The next generation of Maples children continues the family involvement in 4-H. Six of the seven grandchildren have been 4-H members with projects from beef to baking. And this year, two have lambs and swine projects.

The lessons learned in 4-H have helped the Maples family impact agriculture across the Southeast as they continue to be involved in the livestock industry as a way of life and as partners with organizations strengthening farming in today’s economy. 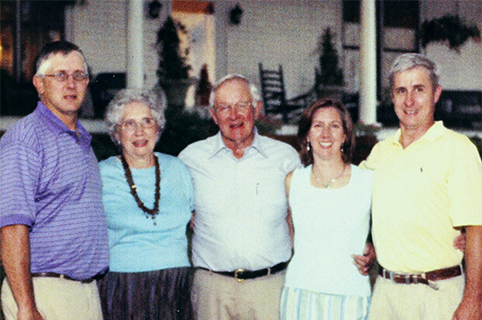