Growing up in Dadeville, Alabama, Thelma Sheppard found herself involved in the 4-H Clubs of Tallapoosa and Macon Counties. That itself had been a task! The only 4-H clubs available were the Boys’ Corn Clubs, but Thelma and her sister Eugenia joined anyway. Later, helped by a sister-in-law, the two of them started a 4-H club for girls. Thelma worked hard at her 4-H club work and eventually served as club secretary, vice-president, and president. Little did she know what a part 4-H would play in her adult life!

Thelma Sheppard was educated at State Teachers College in Livingston, Alabama, and Auburn University, receiving her B.S. degree in home economics from Auburn in 1936. When at Auburn, she shared living space with a sister and two brothers, who were all in college at one time! Her first position was with the Federal Securities Administration as a social worker. She worked there for about six years before taking a position in Tuskegee with the Office of Price Administration during the latter war years.

It was Extension’s fortune when Thelma applied for employment. Her excellent working background was recognized, and she was placed as assistant home demonstration agent for Baldwin County on January 2, 1947, assigned to 4-H Club work. By April, she had been promoted to full agent status. It was “natural” that she would meet and marry Mr. John Gottler, the local postmaster who was also the 4-H Club Leader in Elberta. By March 1950, she decided to resign from her Extension position and dedicate herself to her new husband and soon-to-be family. This did not end her involvement with the 4-H clubs, though. She was the 4-H Club Leader at St. Benedict’s School in Baldwin County from 1960 to 1964, and then for the Elberta Community 4-H Club for ten years from 1963 to 1973. She also belonged to the Josephine Homemakers Club.

The town of Elberta, near Foley, in Baldwin County, was where Thelma Gottler called home. Her husband John still lives there as do both sons, Jimmy and John Jr. Quoting John Jr. about his mother at her passing: “She walked a long hard path in this world. She may have stumbled, but she never gave up. She touched the minds and hearts of a lot of people, both young and old. Maybe, just maybe, she made this world a little better for having shared her life with all of us.” A fitting tribute. Thelma was also the mother of Betty Got­tler, who is currently a County Agent in Morgan County.

It is our honor to inscribe the name of Thelma Sheppard Gottler on the dedicatory plaque of the Extension Memorial Chapel. 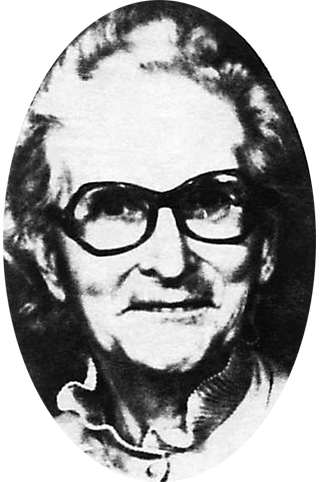