Theresa E. Threadgill, County Agent 4-H, Sumter County, retired May 31, 1981, after 24 years of service to the Alabama Cooperative Extension Service. A native of Perry County, she was dedicated to the philosophy of helping people to help themselves, meeting their priority needs, and improving the quality of life for all people.

Theresa Threadgill began her Extension work on September 1, 1957. Throughout her career, Theresa encouraged and aided 4-H’ers, homemakers, and citizens of Sumter County. She worked with almost a thousand girls each year in the 4-H program. Many of them received district, state, and national awards. One of her volunteer 4-H leaders received a state award with an expense-paid trip to National 4-H Congress in Chicago.

Theresa was a member of Canaan Presbyterian Church, where she was served on numerous boards at the local, state, and national levels. She was the President of the National Missionary in Presbyterian Church, and also a board member of the General Assembly and Synod. She was a member of the Alabama Education Association and the National Education Association, the O.E.S., and the Heroines of Jericho.

Theresa (Evans) Threadgill married Obadiah Threadgill in 1946. Five children were born: Obadiah III of Tuskegee, Alabama; Kenneth, Gloria, and Reginald, all of Birmingham, Alabama; and Paula of Starkville, Mississippi. Her daughter Paula, who also works in Extension (first in Alabama and now in Mississippi), says, “Mother worked hard to improve the lives of the citizens of Sumter County. She enjoyed her retirement, especially traveling and visiting her grandchildren and great-grandchildren.”

She touched the lives of families in Sumter County, and now to honor her life, the name of Theresa E. Threadgill is inscribed on the dedicatory plaque of the Extension Memorial Chapel. 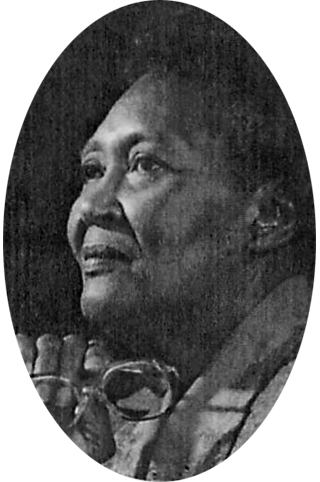