“He was loved and respected by all who knew him.” That is a great sum­mation of one’s life. And it’s true when spoken about Tom McCabe. He was a man of conviction, a man who dedicated his life to his family and his career, and he was, indeed, a man admired and respected. He will be missed.

McCabe was born in the small Walker County town of Dora and was the son of Thomas and Myrtle McCabe. After graduation from Dora High School, he attended Auburn University and graduated with a Bachelor’s degree in Agricultural Engineering in 1939, later returning to Auburn for a mas­ter’s degree in Agriculture.

Tom was employed with the Alabama Cooperative Extension Service from June of 1939 to July of 1976, with a furlough from 1941 to 1946 while he served in the military — later retiring as a colonel in the U.S. Army Reserve. He began his Extension career as Assistant County Agent in Greene County, and also worked in Lamar and Calhoun Counties before transferring to Montgomery County in 1957. He was assigned as County Extension Chairman for Montgomery County in 1965. He remained there until his retirement on July 31, 1976.

While with the Extension Service, Mr. McCabe received the Distinguished Service Award for service to agricul­ture and rural life in 1975, and during his chairmanship of the Montgomery County Rural Development Com­mittee, it was named the outstanding committee in the state for 1975. While he was chairman of the Montgomery County Farm-City Committee, it received a national award for bettering urban and rural relations, and he received a state Extension award for the most outstanding radio program. He also wrote two columns in The Montgomery Advertiser: “Gardening Gimmicks” and “Things to Remember.”

In addition to distinguished agricultural service, McCabe was also a civic leader in Montgomery. He was past ­president of the South Alabama State Fair, Kiwanis Club of Montgomery, Montgomery Chapter of the Red Cross, and the Montgomery TB and Lung Association. He was also named Elder Emeritus of the Memorial Presbyterian Church.

After retirement, he built a home in the country, outside of Hope Hull, and spent most of his time landscaping, gardening, and tending his roses.

In 1946, he married Anna Belle Cammack, who is honored also in the “Book of Memories,” having died less than a year earlier. Survivors include their daughter Ann Patterson McCabe Forman of Birmingham; their two sons, Thomas P. McCabe, Jr., and John David McCabe, both of Montgomery; and five grandchildren.

In recognition of his many contributions, we are honored to inscribe the name of Thomas P. McCabe on the ded­icatory plaque of the Extension Memorial Chapel. 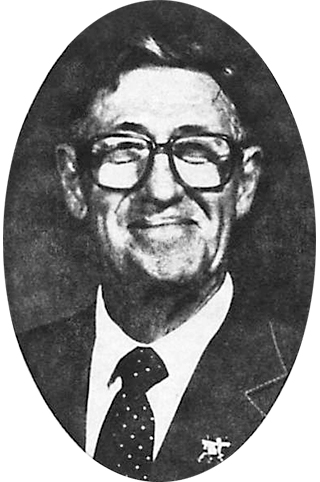