Virginia S. Gilchrist was an outstanding Extension Home Economist and a true “Southern Lady.” She was a mentor, an encourager, and precise with what she did. She was described as graceful, elegant, professional, and enthusiastic about her work. She distinguished herself as a home economist, receiving numerous awards, including the Distinguished Service Award from her peers in the National Association of Extension Home Economists.

Virginia graduated from Carrollton High School and attended the University of Alabama. She graduated with a B.S. degree in 1947. During World War II, she worked for the Army Air Force in Gulfport, Mississippi. In 1968, she received her Master’s degree in Home Economics from Auburn University. Her first job out of college was teaching Vocational Home Economics at Tuscaloosa Senior and Montgomery County High Schools.

From June 1955 until her retirement in December 1985, Virginia was the Extension Home Economics Agent in Montgomery County for a total of thirty and one-half years. She worked with 4-H, adult home economics programs, and EFNEP. She was dedicated to her job and worked hard planning, preparing, and delivering programs in all areas of home economics. Because of her many radio and TV appearances, she was recognized by many homemakers in the Montgomery area as the authority on foods, clothing, and family life. She had a daily radio program, “Noon Day Notes with Virginia Gilchrist,” from 1966 to 1974.

“Virginia was my mentor,” said friend and adjoining county coworker Marilee Tankersley. “She was hard-working, smart, and fun to be around. She loved her work and always did what was right for her family and Extension. She assisted with programs and helped me to grow, both personally and professionally.”

Always looking for ways to promote Extension, Virginia was an innovator. One of her proudest accomplishments was her work with the sight-impaired and starting the first 4-H Club for the blind. She was in demand for programs and always answering questions about foods and food preservation.

Virginia was proud of her work as an Extension Home Economist, but her family was most important. Her husband Arthur, son Michael, his wife, and three grandchildren were her pride and joy. Her family said, “She was always a mother first.”

After her retirement in 1985, Virginia continued to enjoy her grandchildren, club and civic involvement and using her many food preparation skills. She stayed very active in her church. In 2002, she had a severe stroke and never recovered. She spent her last years in long-term care. Virginia died on March 5, 2007. All her friends will remember her as she was in life, the epitome of a true lady.

To honor the many accomplishments of Virginia Speed Gilchrist, it is with great respect that her name is added to the dedicatory plaque of the Extension Memorial Chapel. 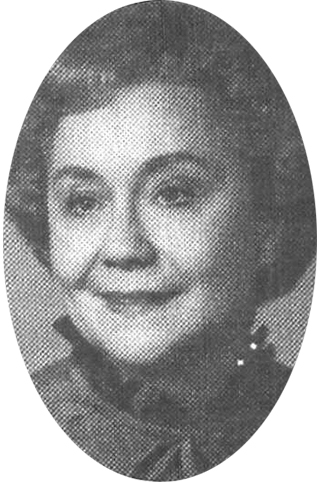