From the words of Jack Smith, retired ACES employee, and friend of Bill Wilson….

Lest we forget, of the many achievements that we can point to in Bill Wilson’s life are these…

He walked the hills and hollows of the 4-H Center campus with members of his search group. They were seeking just the right spot for a chapel that would serve the spiritual needs of the hundreds of thousands of Alabama young people for years to come. They found it, and today, on the highest point of the Center grounds, stands an outdoor chapel, built for the ages, and with it a landscaped courtyard displaying names of deceased Extension workers. His name now joins theirs, many of whom were his close friends.

Bill played a major leadership role in raising money for the project, sponsored by the Alpha Pi Chapter of Epsilon Sigma Phi, the national honorary Extension fraternity. He was involved in every major decision, from design to finished building. He loved young people, 4-Hers in particular. He often said his work on this project was indeed a labor of love.

He served in the Pacific Theater in WWII and earned his Bachelor’s degree from Alabama Polytechnic Institute (API) in 1949 and his Masters from Auburn University in 1960. He joined the University’s Extension Service in 1954, first as an assistant county agent in Ashland and then, in 1961, became one of the twelve original area rural development specialists in Alabama. He returned to the Auburn campus in 1976 and finished his career at Auburn as a specialist in rural health issues. He retired in 1983 to complete a career in which he touched thousands of lives in his work, his church, and as a member and leader in a large number of professional organizations.

He was a Deacon in each church that he served and sat on numerous church committees. His favorite committee was the Building and Grounds Committee. He spent many Saturdays planting and pruning, repairing, and building.

His beloved wife, Rudine Cooper Wilson, followed him shortly in death. He is survived by his son, Robert “Bob” Wilson, and daughter, Becky Hardy (Rodney), and seven grandchildren and six great-grandchildren.

We honor Bill for his leadership in building the chapel, but also for who he was and what he did, and for his dedication and joy in serving God, the people of Alabama, his church, and his family.

The Alpha Pi Chapter of Epsilon Sigma Phi honors and remembers Mr. William E. (Bill) Wilson by placing his name on the dedicatory plaque of the Memorial Chapel. 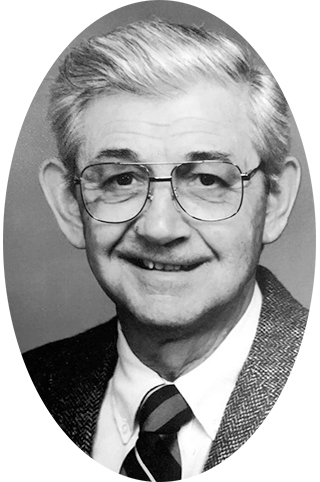