William Henry Johnson, Jr., shall always be remembered for his courteous manner, his gentleness, and his dedication to serving his community. He was an honorable man in every way. Born in Banks, Alabama, in Pike County on Friday the 13th of February, 1907, he was the second child of William Henry and Sara Jane McDowell Johnson.

W.H., or Hiker as he was fondly called, attended elementary and high schools in Luverne, Autaugaville, and Montgomery. He graduated from Sidney Lanier High School in 1927 and graduated from Auburn University with a B.S. Degree in Agriculture in 1932.

His career with Alabama Cooperative Extension Service began as Assistant County Agent in Montgomery County. He did an excellent job working with the rural youth and with the cattlemen — both dairy and beef. He was called into the U.S. Armed Services in 1941 and was discharged as a captain in 1945. He was appointed County Agent in Greene County on August 17, 1942, where he served effectively and efficiently.

While living in Greene County, and aside from his duties as a County Agent, W.H.’s other activities included the effort to reorganize the county Farm Bureau, organizing the Greene County Field Trial Club, and serving as a member of the Eutaw Lion’s Club and the prestigious Twenty Three Circle. In addition, he was a longtime member of Eutaw United Methodist Church, where he served as a Sunday School Teacher and Administrative Board member. W.H. was the recipient of many awards — one of which was the AACAA Distinguished Service Award in 1964.

The Greene County Field Trial Club held an annual event that attracted many of the nation’s top bird dog trainers and owners for a week’s stay in Greene County. Needless to say, aside from his church, family, cattle, and Auburn, heaven on earth was to get out and watch a good bird dog run.

Mr. Johnson retired in 1972 after serving over 30 years as County Agent. In 1981, he moved back to Montgomery. Hiker Johnson was an institution within himself. His detailed account of history in his autobiography entitled From Ox Cart To Moon Walk was most exciting. His tales of life in Greene County were most interesting, explaining the hardships of poor farmers and details of swapping a pony or a mule were examples of his diversity and knowledge.

Preceded in death by his wife of 57 years, Hayden Dean Johnson, he is survived by his son, W.H. “Bill” Johnson, III, daughter Jane Johnson O’Rear, both of Montgomery, and four grandchildren. W.H. had observed his 90th birthday and was enjoying his 25th year of retirement from the Alabama Cooperative Extension Service when he died at his home on April 9, 1997, in Montgomery.

In tribute and honor to this man and his devotion, the name William Henry Johnson is inscribed on the dedicatory plaque of the Extension Memorial Chapel. 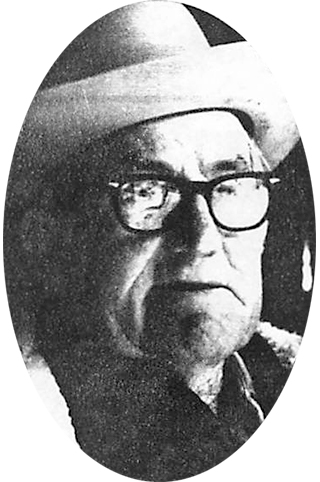