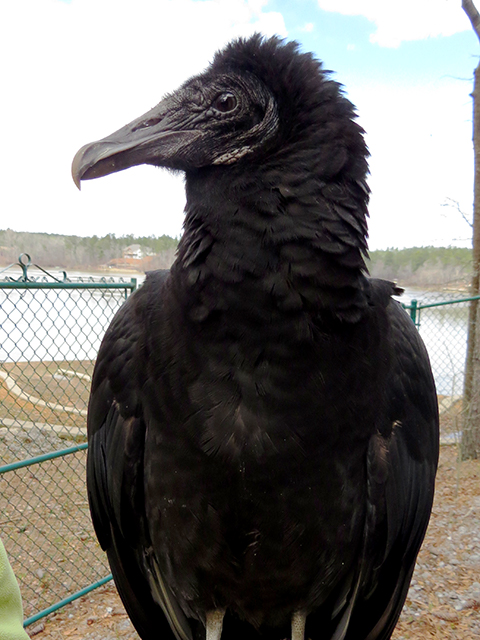 The two American black vultures are among the most recognizable birds in our collection because of their featherless crowns and dark plumage, both adaptations to minimize bacteria from their diet. Often seen basking on snag trees and power poles, these large birds utilize the sun’s rays to sanitize their plumage. Vultures are often considered raptors, though they eat carrion instead of live prey and are more closely related to storks. Flint and Ember are part of our avian team because of being imprinted on humans as a result of habitual feeding. When the people moved on, these two were unable to care for themselves without the aid of human interaction. The result was aggressive begging from strangers. 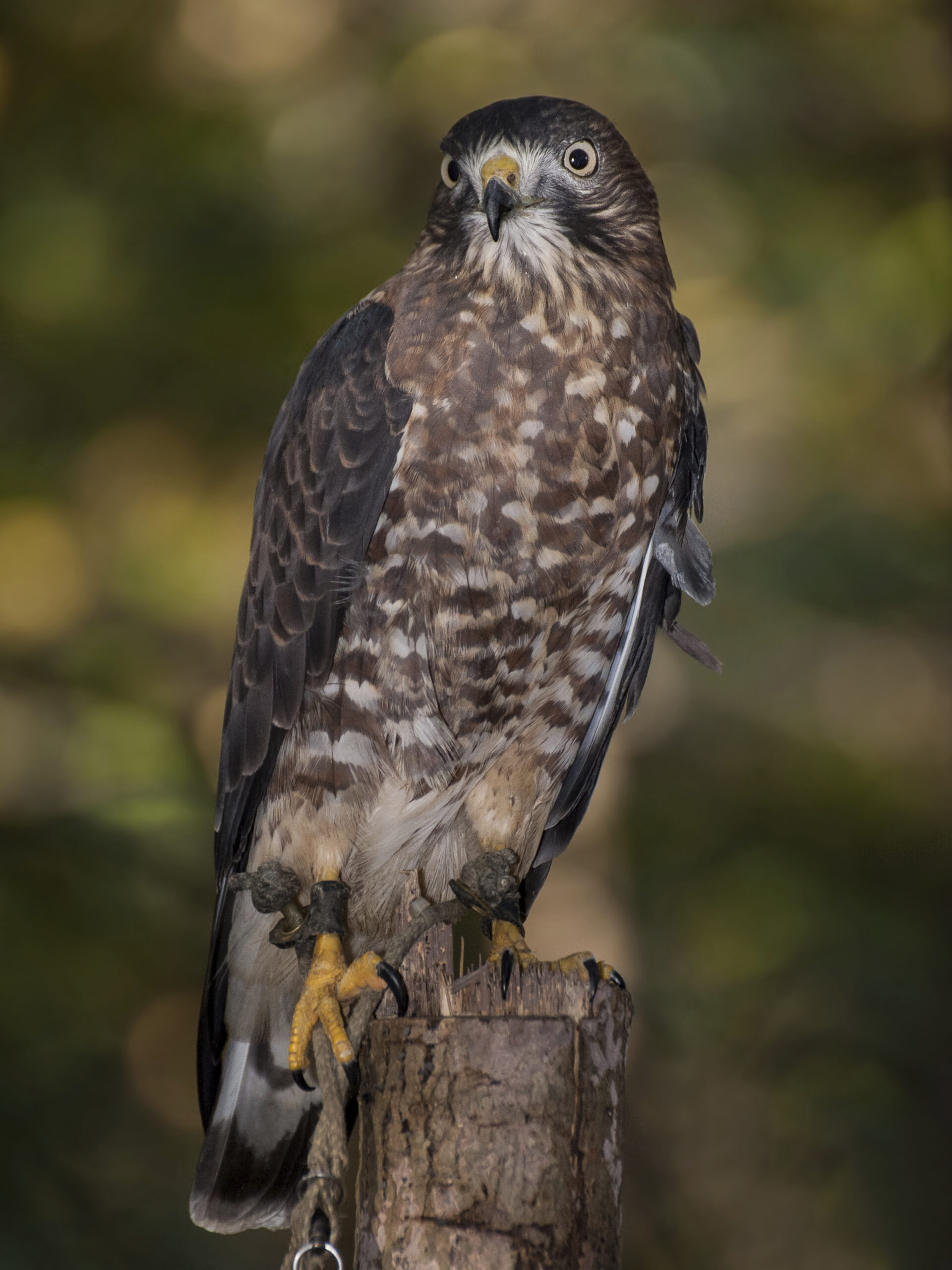 Broad-winged hawks are unique raptors. Every year they migrate more than 4,000 miles to Central and South America in large groups called “kettles.” As the birds move through the narrow mountain ranges, locals call them “the river of raptors.” The 4-H Science School broad-winged hawk is named Costa after Costa Rica, which is one of only a few countries with resident broad-winged hawks. Costa hatched in the late spring of 2013 and ended up at the Carolina Raptor Center in July 2013 as an orphan with a damaged right foot. He had to have his third digit partially amputated, and his fourth digit is nonfunctional. He joined the 4-H Center in late June 2014. 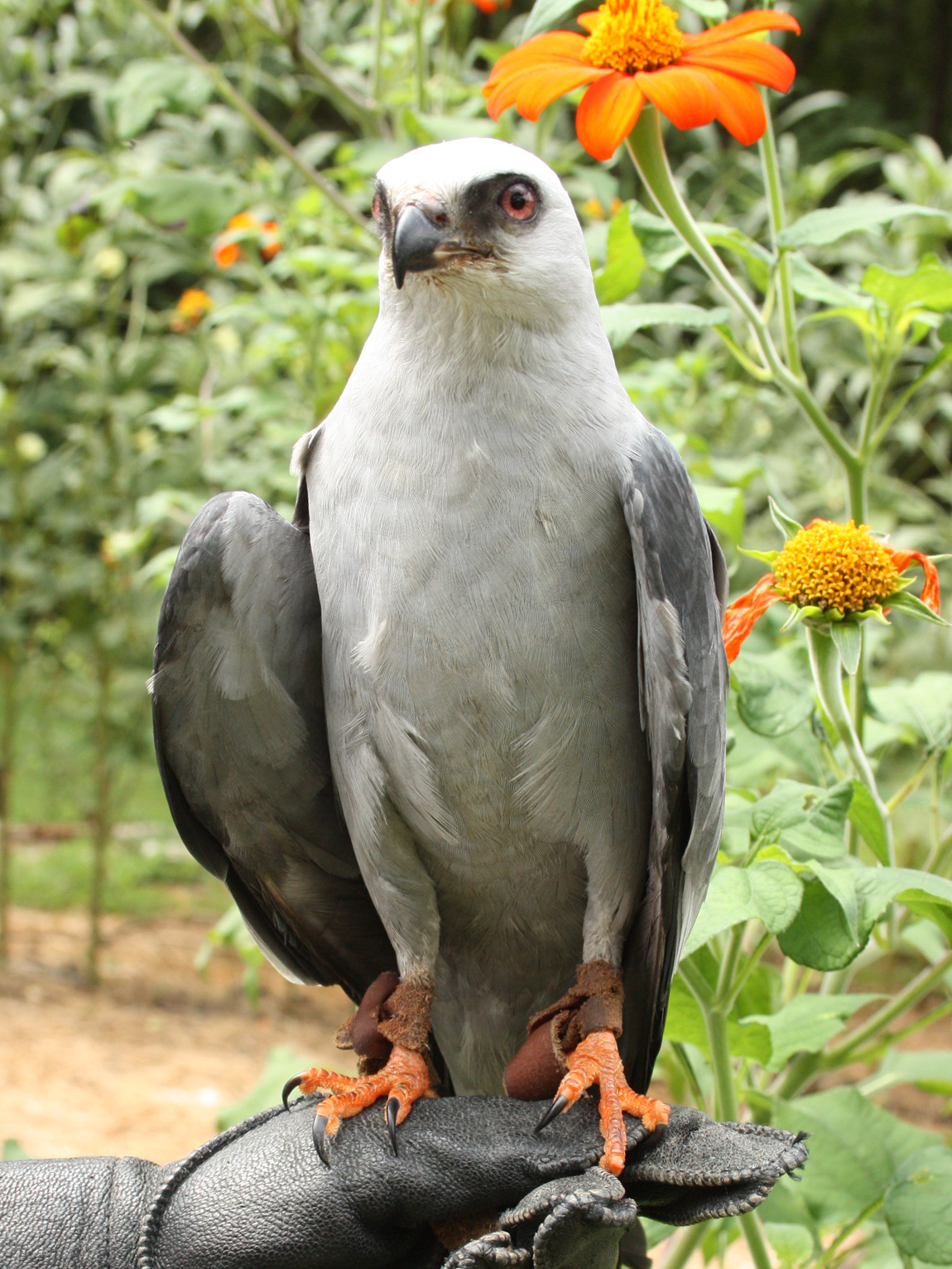 Mississippi kites are small, gray raptors with striking red eyes. They are primarily insectivorous, making them a friend to farmers as they help control crop-eating insects. They spend a great deal of their time in the air, floating on thermals, much like the man-made toy of the same name. The Science Center’s kite, Delta, arrived at the Alabama Wildlife Center with a fractured ulna in his right wing during the summer of 2012. Though the bone healed over time, he has nerve damage that limits his ability to sustain flight (and, therefore, successfully catch his prey) and rendering him unreleasable. He joined the 4-H Center’s collection in April of 2013 and is a spring 2011 hatch. 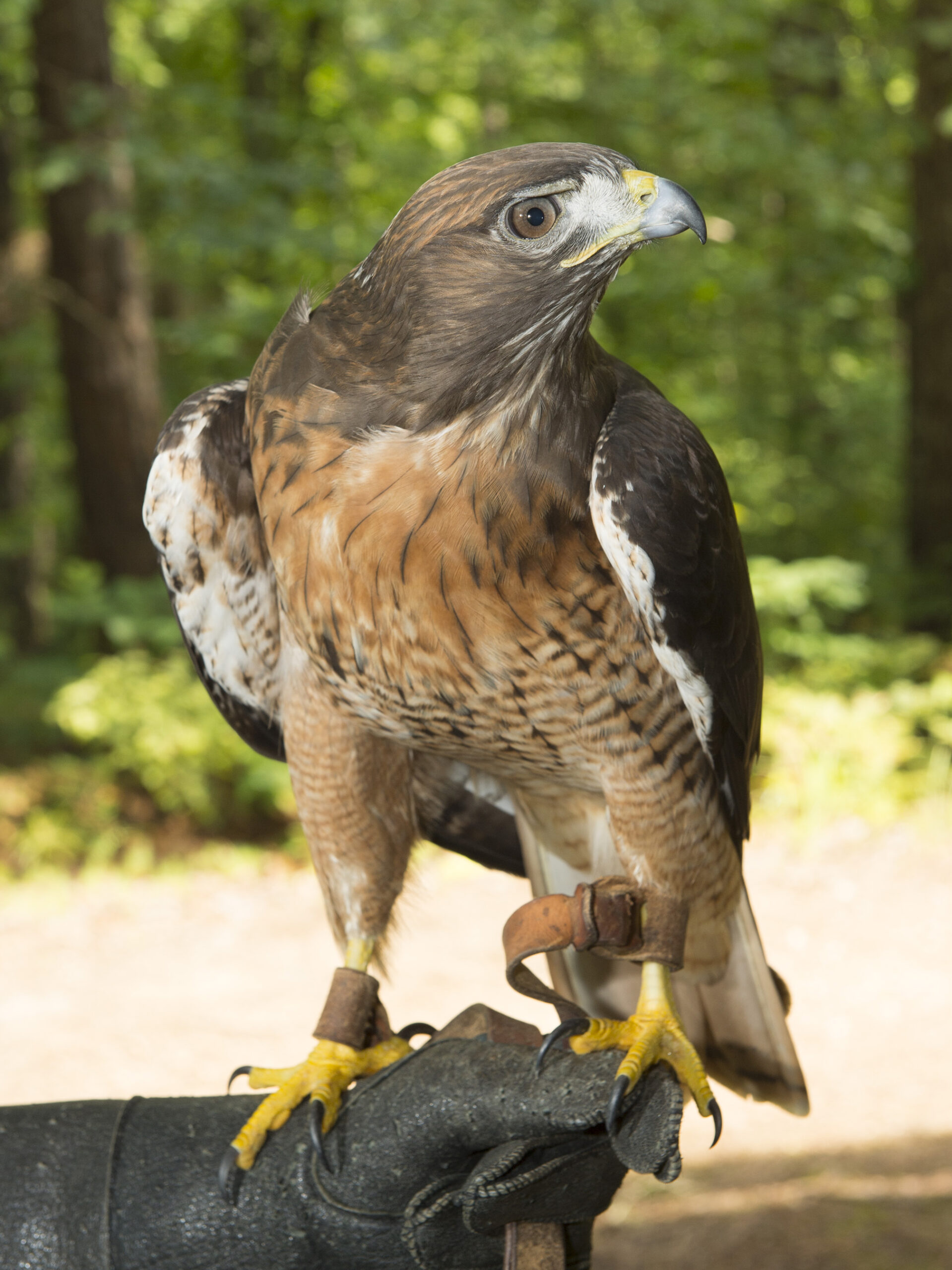 Red-tailed hawks are common throughout North America and are found on every continent across the globe except Antarctica. They are the largest species of hawk in Alabama, and you can easily identify them by their distinctive reddish-brown tail. The 4-H Center has two red-tailed hawks. Sequoia is an illegally human-imprinted bird hatched in the spring of 2008 in California, and Arrow came to us in 2014 after a car strike. 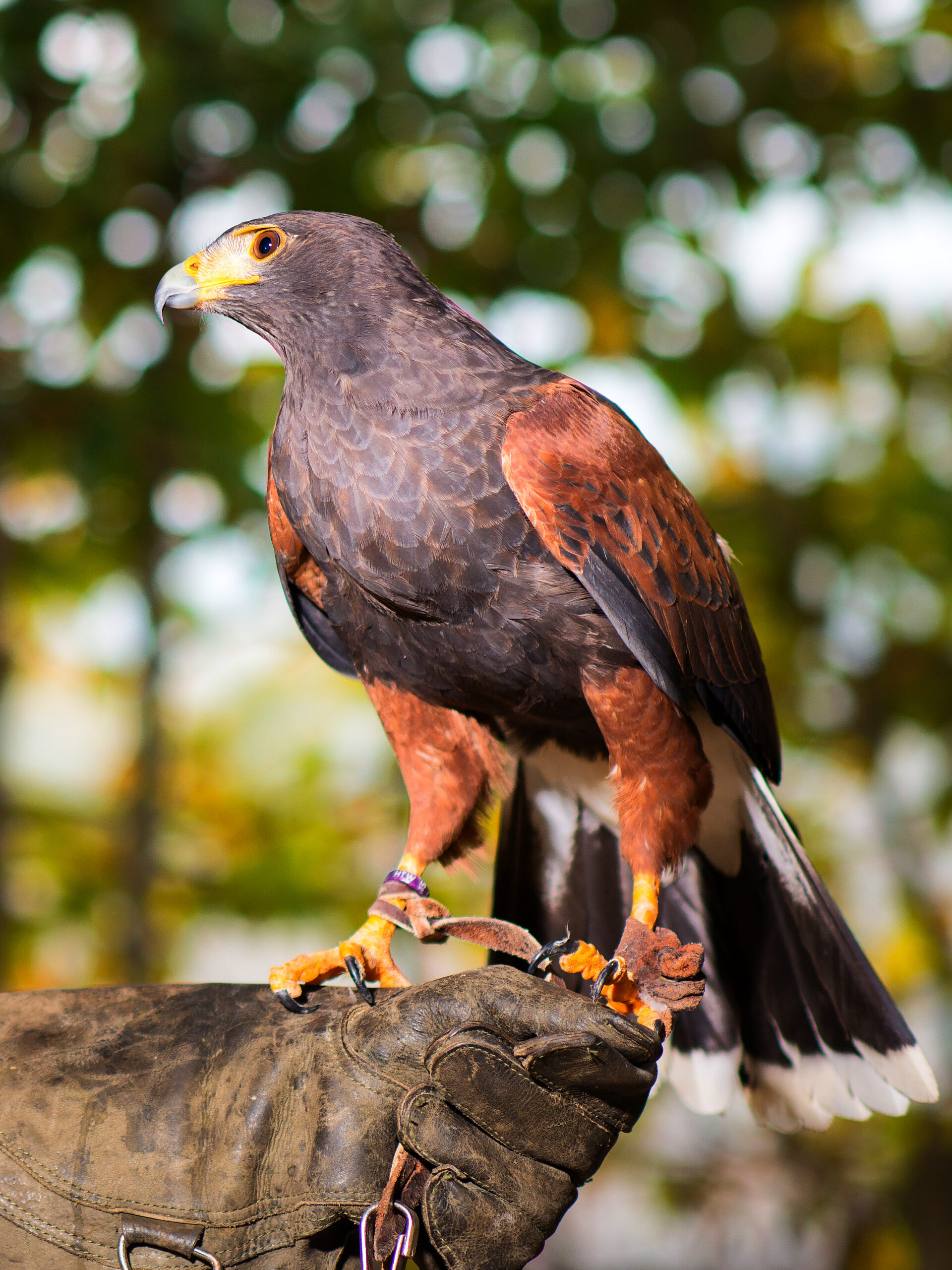 Harris’s hawks are commonly found in the arid desert regions of the southwestern United States. They are one of the only raptor species that hunt in pairs or groups and thus have earned the nickname “wolves of the sky.” The 4-H Center’s two Harris’s hawks were hatched for education in the spring of 2011 by an individual breeder in Michigan. 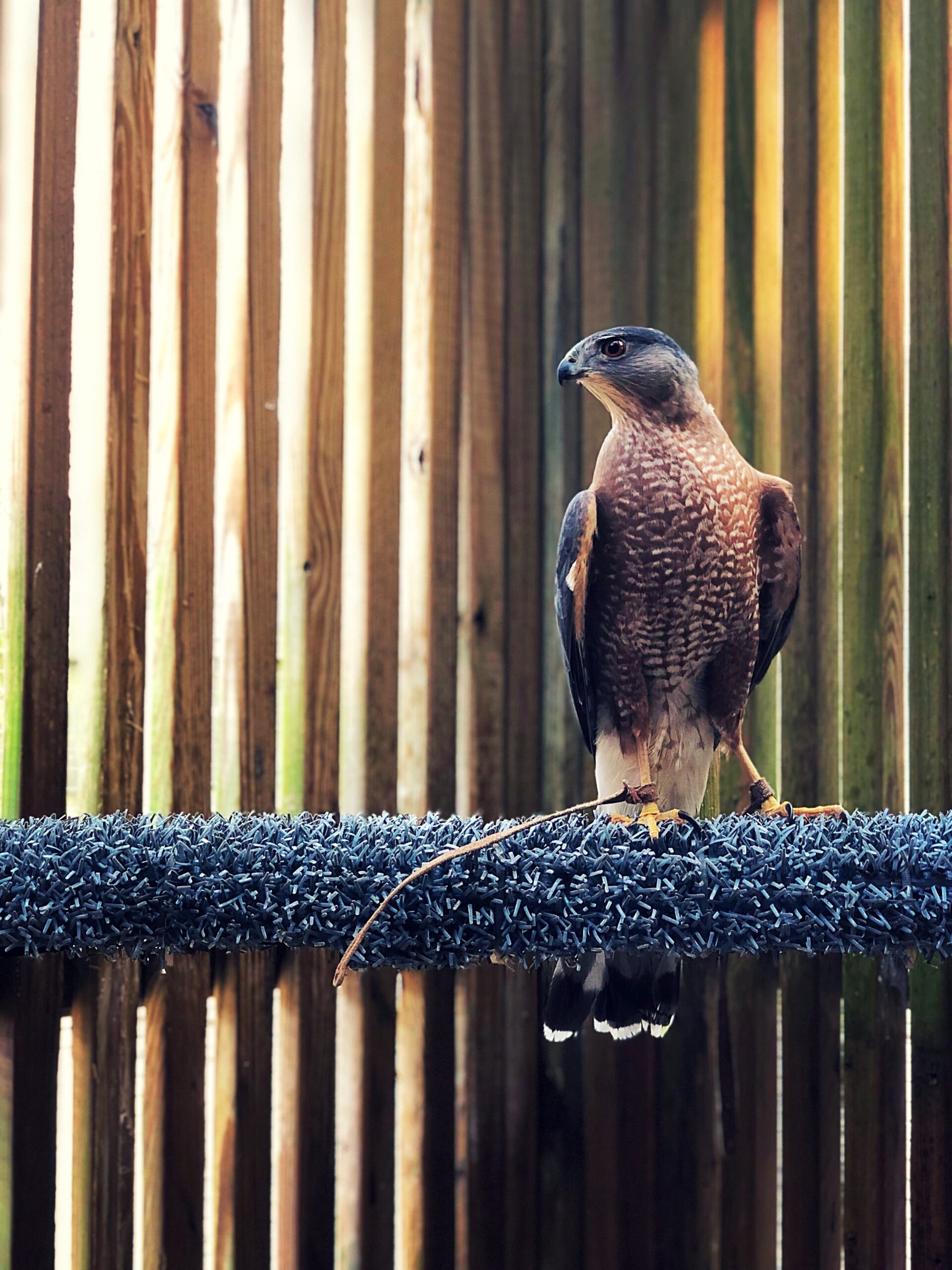 Cooper’s hawks are medium-sized, short-winged hawks with long tails from the family Accipitridae. They are extremely skilled flyers and can move swiftly and accurately through dense woodland areas after other birds, which are their primary prey in the wild. Gifford Pinchot, named for the first chief of the U S Forest Service, is one of our most recent additions to the Raptor Trek collection. Gifford Pinchot is a young, imprinted bird. Imprinted birds are those that have been hand-raised and are, therefore, not fearful of humans. They will likely hurt themselves or others in their efforts to seek food if they are released in the wild, so most are evaluated by veterinarians and determined to be unreleasable.

Whoooooo wants to learn more about owls? All of the 4-H Center’s screech owls were injured in accidents. These accidents usually occur owls hunt too close to the road. Mice and bugs are attracted to the roadways by food tossed from car windows. 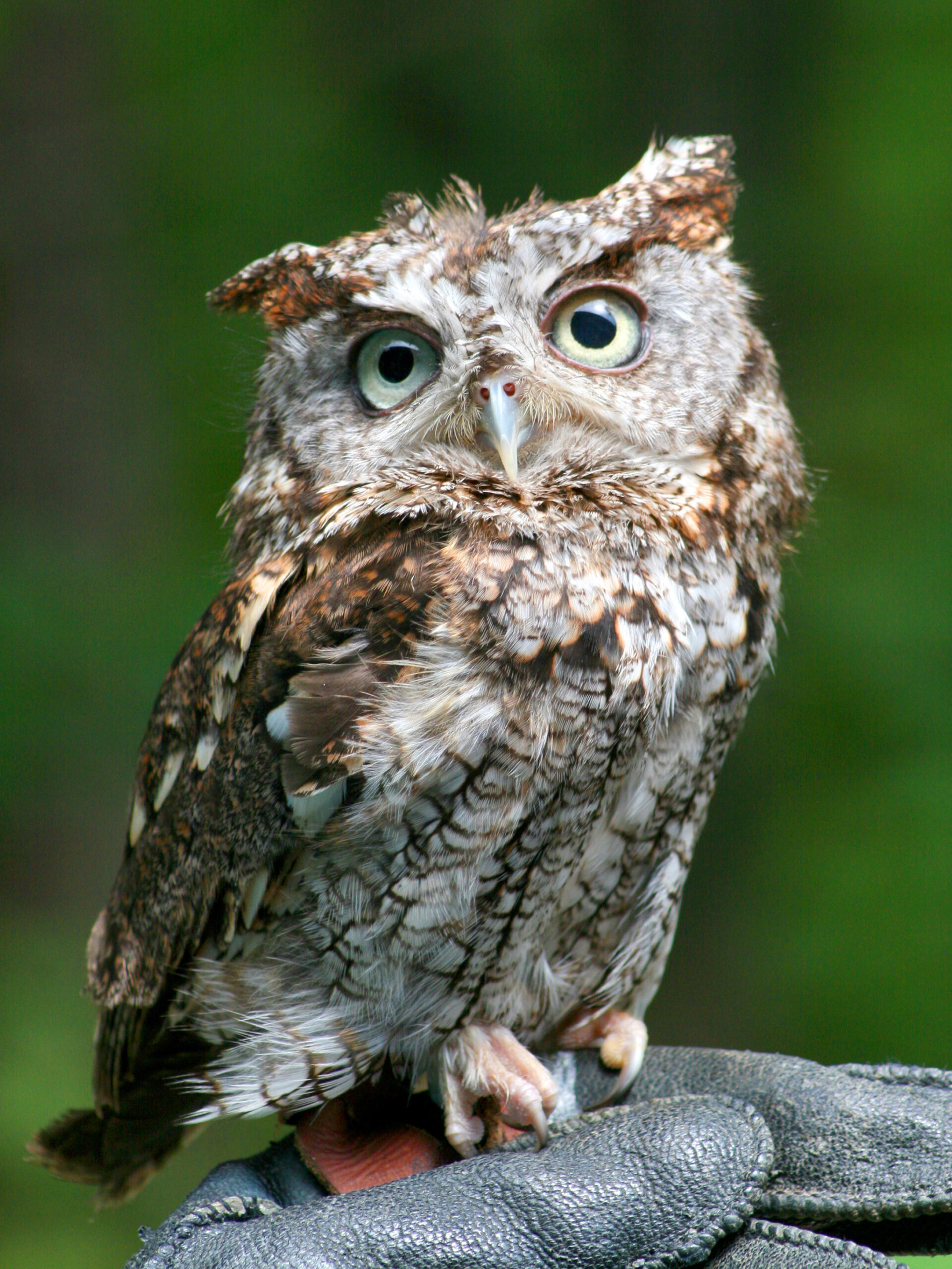 Eastern screech owls are the smallest owl species in Alabama. They may be gray, red, or a combination of both colors. All of the 4-H Center’s screech owls were injured in accidents. 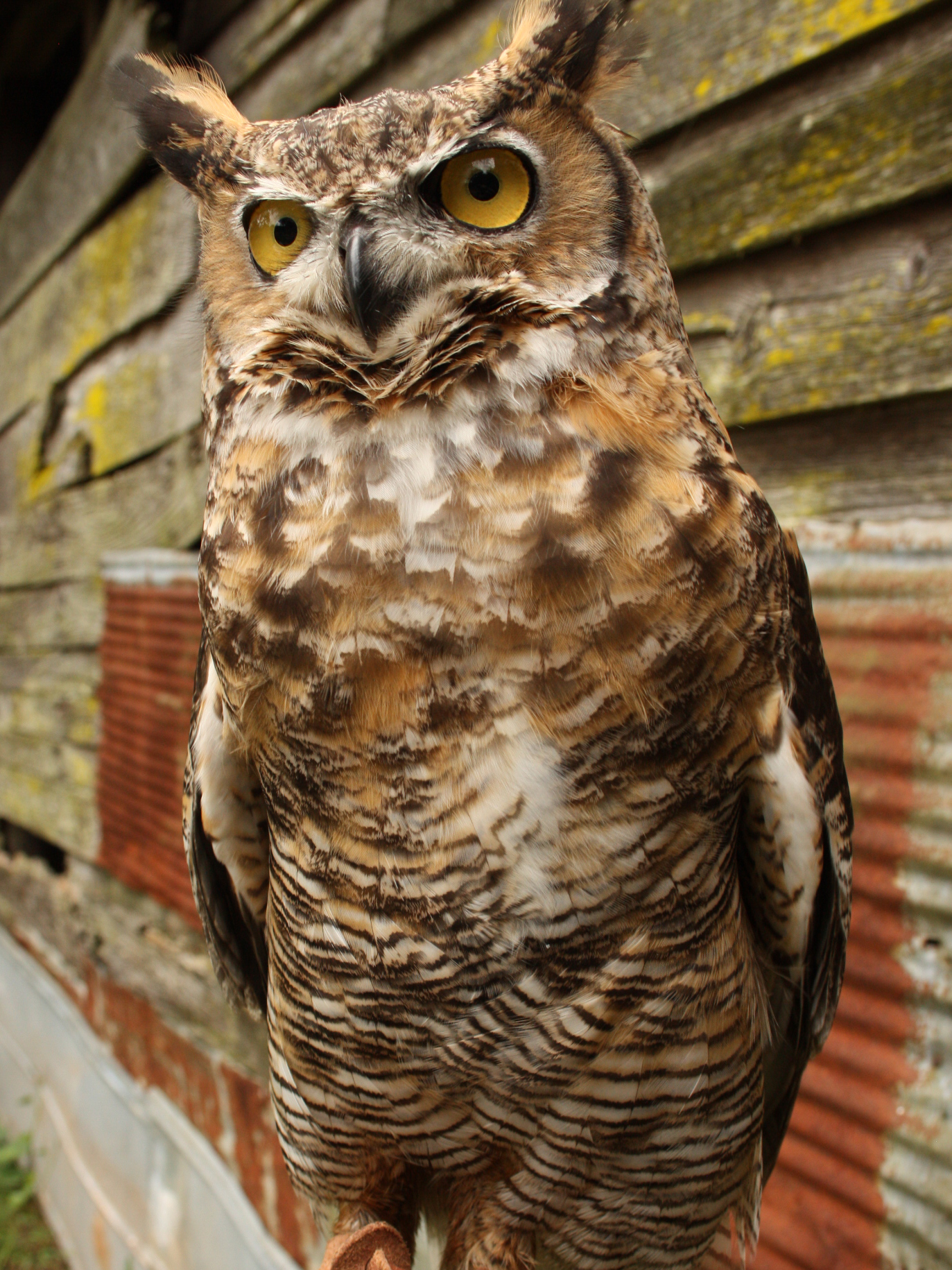 Great horned owls are Alabama’s largest owl species. They are active at dawn, dusk, and into the night. Great horned owls will frequently take large prey such as geese, herons, and even skunks. Catalina hatched in 2008 and is an illegally human-imprinted bird from California. 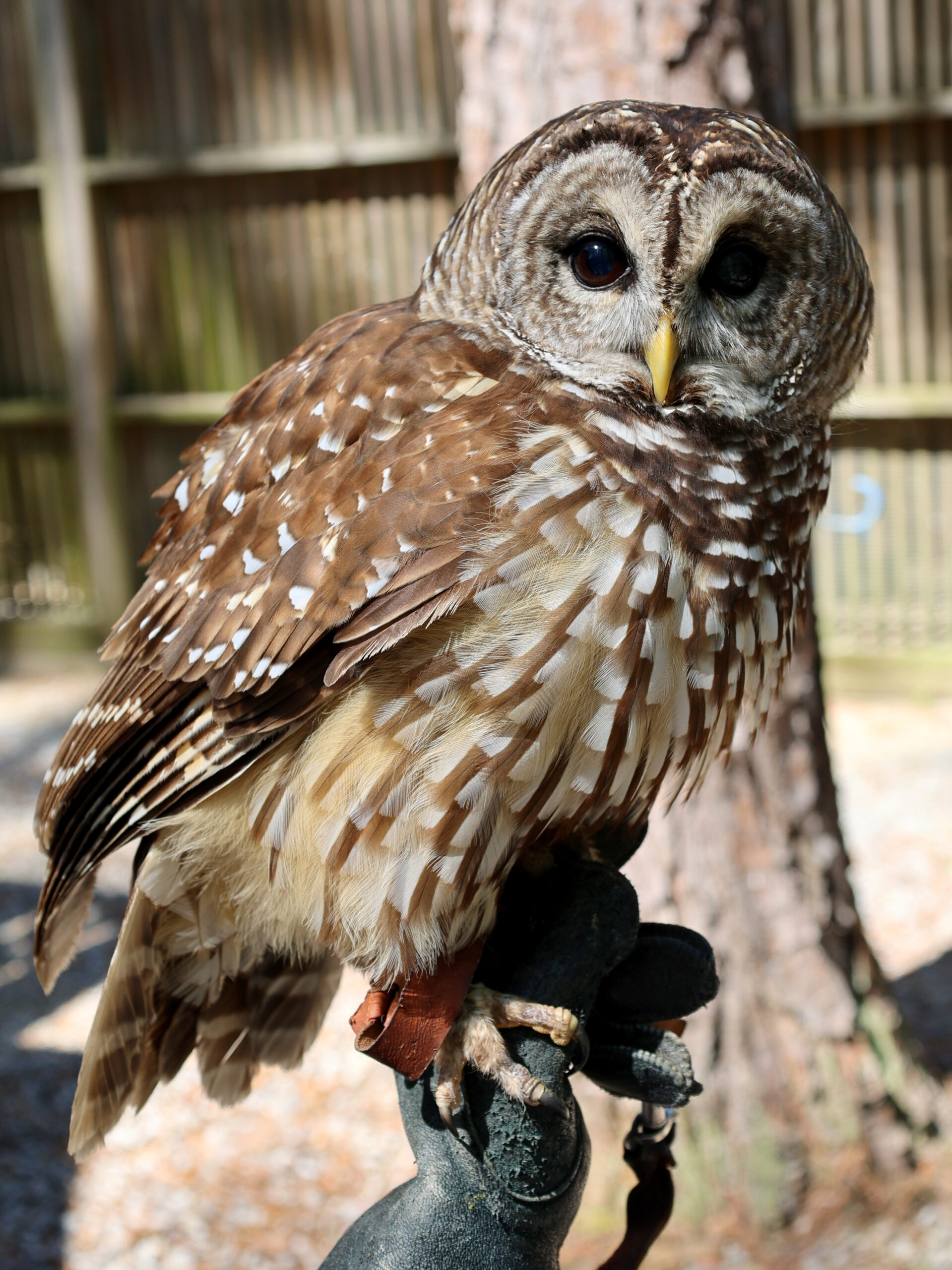 Barred owls are one of Alabama’s most common owl species. Their classic “Who-Cooks-For-You” vocalization can be heard almost any time of day and is a familiar sound to those who frequent the woods. The barred owl’s nickname, the Teddy Bear Owl (named for its round head and overall cuddly appearance), was the inspiration for our barred owl’s name, Roosevelt. President Theodore “Teddy” Roosevelt’s conservation contributions opened the door to the development of our national parks and many conservation regulations. This owl joined the 4-H Science Center in June 2012 and cannot be released due to extensive injuries received in a car collision. She is blind in her left eye, and several toes on her left foot healed poorly after her accident. Though her exact age is not known, she was likely hatched between 2008 and 2011.